As part of the government’s response to the recent problems at the Mid Staffordshire NHS Trust, the health secretary, Jeremy Hunt, has told all Civil Service staff that they have to go and get front-line experience at the places they manage. Some people are treating this as a radical suggestion that could see groups of clipboard-wielding civil servants getting in the way of busy doctors and nurses as they rush around trying to save lives. In fact, this principal of sending managers down to the shop floor has been around for many years, and is a fundamental part of the Lean framework.

Go and See for Yourself
The Japanese phrase genchi genbutsu means “go out and see for yourself” and is a central pillar of The Toyota Way and of Lean management. It is a principal that says “if there is a problem, don’t try to theorise from your box. Go to where the problem is, see it, then solve it”. In many ways, this represents one of the major differences between management culture between East and West. Western managers often dismiss this part of the problem solving process as unnecessary and as a waste of their time. They have a report of the problem in front of them, doesn’t that contain all of the information they need? On the other hand, managers who follow the principal of genchi genbutsu take the view that to have a full understanding of the problem, to ask the questions that others may have missed, and to be able to see the problem’s root cause, they need to see it for themselves.

A good example was written about by Eric Reiss in his book The Lean Startup. Yuji Yokoya was the chief engineer on Toyota’s 2004 Sierra. The model had never sold well in the United States, and Toyota wanted to know why this was. Yokoya went over to the US, hired a current-model Sierra and took it for a test drive. For 53,000 miles.

Yokoya drove through Mississippi, where while crossing a gorge he realised that the high crosswinds experienced on long bridges made the Sierra unstable. He drove through Canada, where he found that the high camber on Canadian roads made more ground clearance a priority. He drove to Anchorage, Alaska and observed steering drifts on gravel roads and to Santa Fe, California where he found the Sierra’s turning circle too large for crowded cities. He spoke to American owners of Toyotas - and of their rivals - and found that there were not enough cup holders in the Sierra when families went to drive-throughs. He also realised that although adults rule the front of an MPV, kids rule the back. And they get bored, cramped, and carsick, especially on long journeys.

Japan is much, much smaller than the US, so people don’t make long journeys in Japan in the same way that they do in America. The Americans also eat in their cars, something that the Japanese almost never do. Geography over North America is also much more extreme than in Japan. If he had stayed in his office, Yokoya would never have found out about the huge gulf in user experiences between the two markets and Sierra sales would probably have stayed flat. Instead, for the cost of a couple of weeks worth of hotels and petrol bills Toyota took Yokoya’s learnings, applied them, and increased sales of the Sierra by 30% in their target market.

How Can This Apply to the NHS?
In his report into the Mid Staffordshire NHS Trust, Robert Francis QC said that a big part of the problem was that there was a disconnect between officials and the front-line. It has been difficult for civil servants to observe the cause-and-effect process of the changes they make to procedures, and have little feedback about whether those changes have been implemented successfully - which it seems was the big problem at Mid Staffordshire. This policy is an attempt to rectify that.

The big issue could be that civil servants do not take it seriously; that they take the western, rather than the Japanese, view on this decree. It could, in the words of Civil Service Commissioner Jonathan Baume become “a gimmick”. But if the civil servants involved are willing to become part of the system then genchi genbutsu could help them to reconnect with staff, find out about what the real - not perceived - problems and inefficiencies are, and identify then solve the root causes of those problems.

Successive governments have decried the NHS, attempting to solve its problems, reorganise it, streamline it, inflate it, reduce manager numbers, increase consultant numbers, reduce consultant numbers, and myriad other ways of getting to the root causes of inefficiencies small and large. Genchi genbutsu should help them to move away from guessing.

What About My Business?
If you work in an environment where the managers rarely come down to the shop floor, then all of those benefits the NHS are hoping to get from implementing this procedure could be seen by your company as well. By getting the managers down and onto the shop floor, they will be able to see the inefficiencies and impediments that you experience every day. It doesn’t matter whether the shop floor is really a shop floor or whether it is a warehouse, an assembly line, or a creative studio like the one we work in, managers getting out there and seeing a problem for themselves should help to reduce niggling issues and solve bigger ones fast. Ultimately, as Jeremy Hunt hopes genchi genbetsu could help you to save money and, as Yuji Yokoya found, it could help you improve your products . Customer choice - how offering more can get you less

When a visitor to your website doesn’t know exactly what they want, it’s important to offer them as much choice as possible,...

Raise your hand if you are unsatisfied by your current marketing efforts! Well, you are not alone. Time and time again I meet... 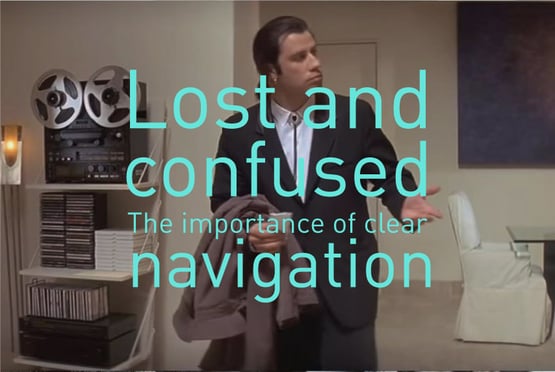 Lost & Confused? Why navigation & content structure are so important!

New look, same blog! As you might've read a few weeks ago, Purple Frog Digital have begun offering Health Checks as part of...